There are a couple of past projects that I have done for sacred spaces or reflecting on theological themes that I would like to propose as a model for what I could do for the Chapel Window at the Voskuyl Prayer Chapel.  It might be that one of these projects might be right for the chapel window “as is,” or redone in a way that reflects the scale of the window.  I would also be open to working on a theme with a similar approach.

Each of these projects are conceptual: they are visually simple but carry layers of meaning in the approach to the work and the materials. In each case there is an element of ritual in the making of the piece. This ritual usually contains a connection to both the sacred and the mundane. They often are based on a reflection of a season in the liturgical calendar.

​
For this project I wrote the word “breathe” with a quill pin with every breath for an hour, then repeated the process a second time writing the word “believe.” Each act of writing the word, including dipping the pen in ink, had to fit into the space of a breath. The times when I made mistakes in the process are just as much a part of the piece as the times when my writing was calm and steady. This resulting work is a document of a kind of breath prayer made tangible. It also alludes to Jesus beathing on the disciples to give them the Holy Spirit. 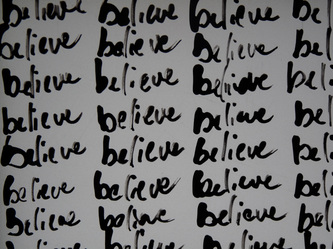 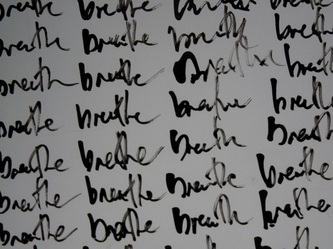 I did this project as part of a series of weekly projects I did for my church celebrating the season of Epiphany. The crossword “pages” were displayed side by side on the altar for the first week. The pages are made of fiberglass resin with inclusions of frankincense and myrrh with gold leaf squares. The pattern of the first page is the black squares from the first every New York Times Crossword puzzle. The pattern of the second page is the black square from the New York Times Crossword on December 24th of 2011 (the most recent Christmas Eve to the year I did the project). The project alludes to the gifts of the magi but also to the idea that the mystery and wonder of Christ is revealed to the world.

This project might be wonderful enlarged  as a window, both with the amber color and the gold. 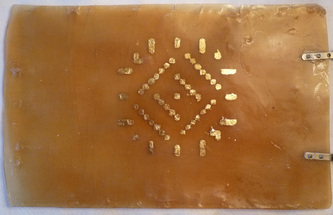 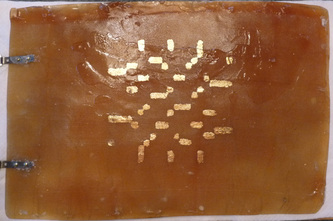 Corpus is a commissioned artwork for the Bible and Theology Department of Wheaton College. It is a sculptural meditation on the death and resurrection of Jesus.  Photographs of this piece might work for the chapel window, especially during the Lenten season.

For the piece, I am used an antique sculpture of the body of Jesus (a corpus) from a Crucifixion and ritualistically covered it with the contents of vacuum bags collected from the college's custodial staff. These bags contained dirt, fiber, bits of paper and other detritus as you might expect. They also contained bits of people from the community: hair and skin cells, for example, were also in the mix.

The term "corpus" is Latin for "body." It is the root for several words in English, including "corpse," corporate," and "corpuscle." All of these words have significance in my approach to this artwork.

Corpus is part of the permanent collection on display in the Bible and Theology department in the Billy Graham Center. 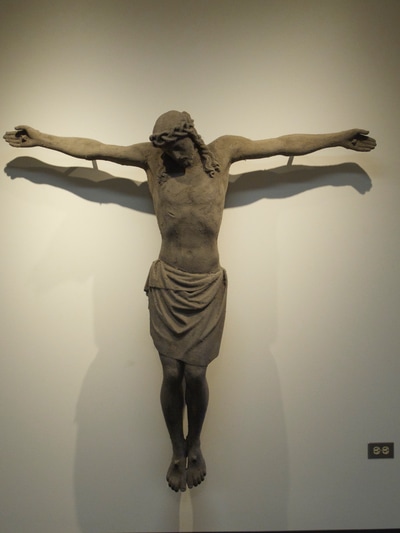 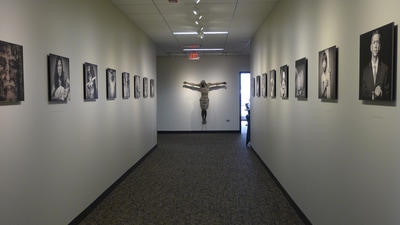 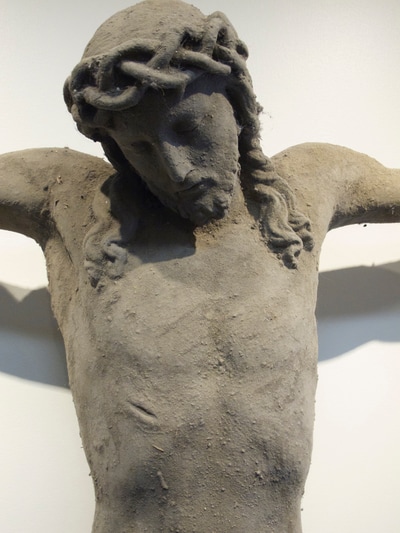 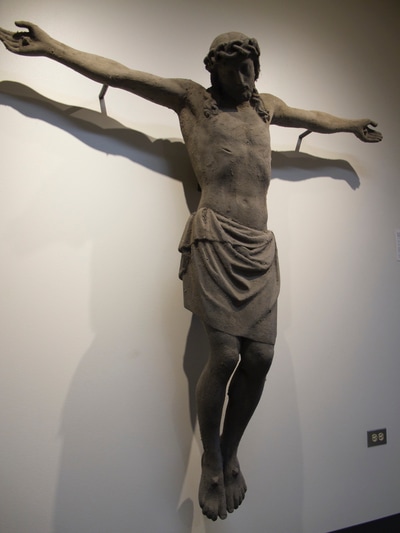 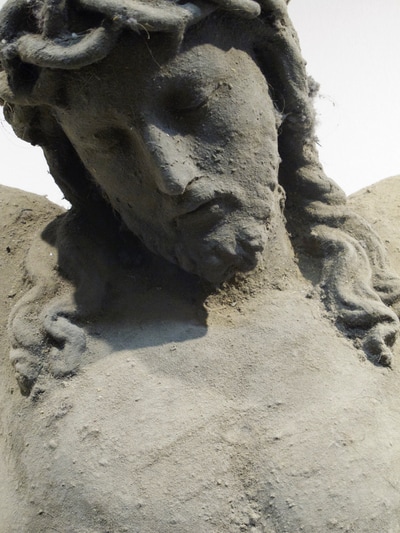 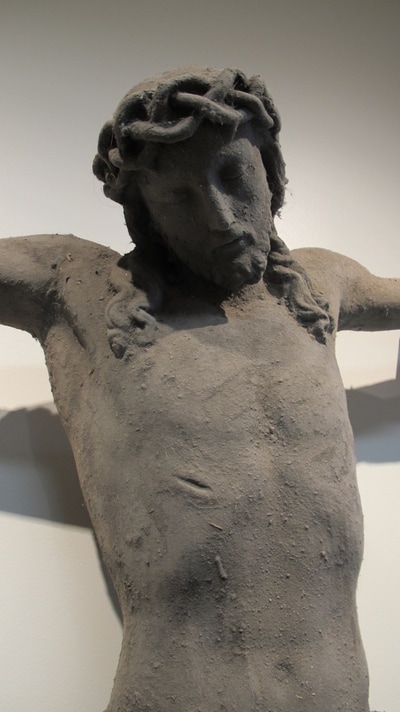 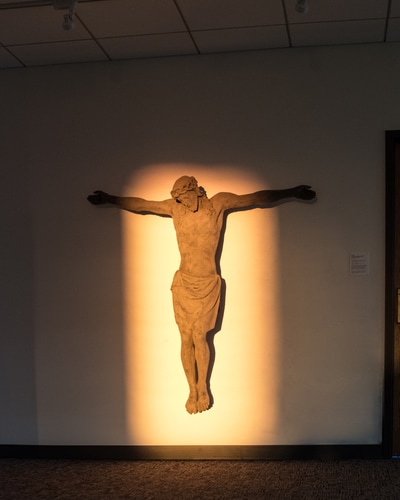 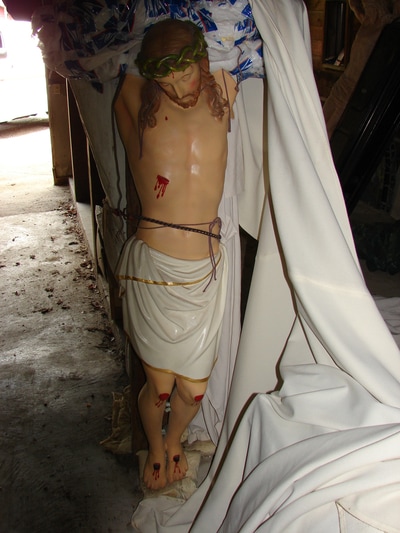 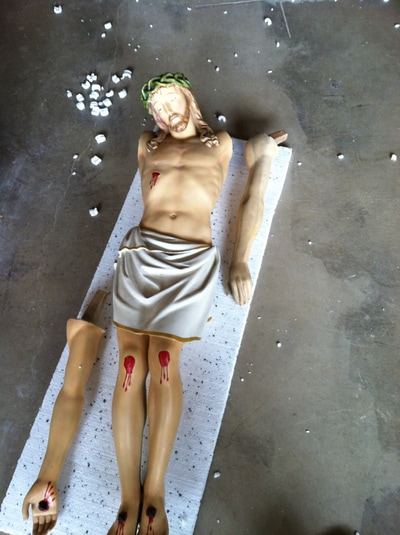 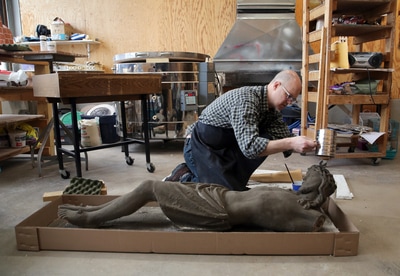 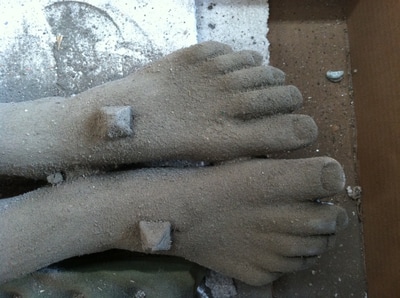 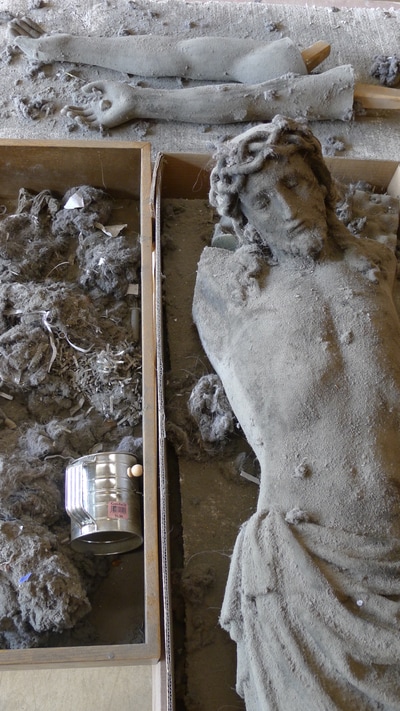